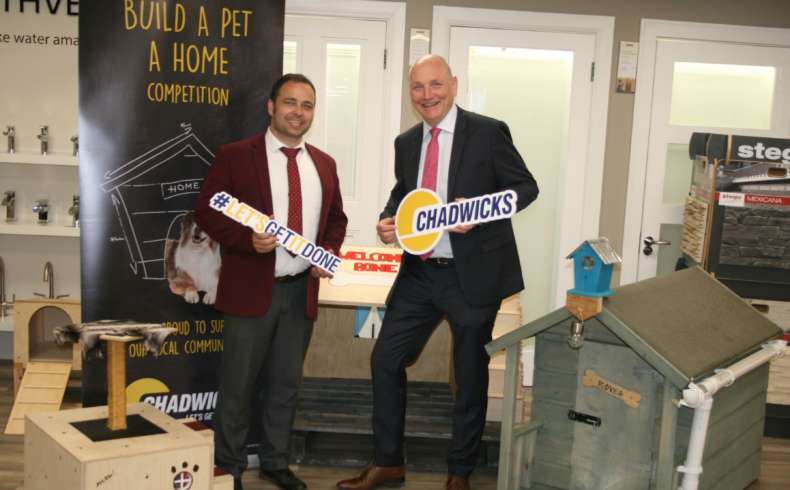 Kevin Carpenter, Tommy Brady and Carl McGovern from Kells in Co. Meath have been crowned champions of the first Chadwicks Pet Home Competition. To celebrate the new and improved Chadwicks Navan branch, Chadwicks called on the future architects, builders and designers from the local area to go big and let their imaginations run wild.

Kevin Carpenter, Tommy Brady and Carl McGovern from Kells in Co. Meath have been crowned champions of the first Chadwicks Pet Home Competition. To celebrate the new and improved Chadwicks Navan branch, Chadwicks called on the future architects, builders and designers from the local area to go big and let their imaginations run wild.

The competition was open to schools nearby to the Navan area and students were asked to form a team and then create their “dream pet home”. Teams from St. Ciarán’s in Kells, Athboy Community School in Ahtboy and Coláiste na Mí in Johnstown then submitted their creative plans and a final physical build to the local Chadwicks Navan branch to be judged by a panel of experts.

The winning project created by the Second Year team was chosen as the overall winner from a list of eight strong entries. Kevin, Tommy and Carl’s dream pet home was complete with solar lighting, waterproof flooring, interior design touches, a clever gutter which allows rain water to drain into the dogs’ water bowl and a bird house on top. Not only that but the students also finished their creation with a personalised name plaque on the door for the beloved “Rover”.

The St. Ciarán’s team put their woodwork skills to the test and the Chadwicks Navan team were blown away by the innovation and work that went into all the entries they received for the competition.

Speaking about the competition, Oliver Smyth, Chadwicks Navan Branch Manager commented: “We are delighted to announce the team from St. Ciarán’s as the winners of this year’s Chadwicks Pet Home Competition. We’ve been part of the local community for over forty years now with twenty-two of our team members living in the locality, so it is so important for us to get involved with the younger Navan generation and encourage them to use the construction skills that they’ve learned at school. We were astounded by the level of skill that went into each project which is so inspiring to see. Well done to all!”

Patrick Atkinson, CEO, Chadwicks Group (formerly GMROI) and judging panel member commented: “Chadwicks Group (formerly GMROI) is proud to support the local Navan community and give the students a platform to showcase their skills. It was tough to pick a winner as we could see the amount of work that went into each entry, but I am very happy to present St. Ciarán’s with a range of expert tools and supplies which we know will be put to very good use.”

Since opening in 1973, Chadwick’s Navan have been catering for all the Building, Plumbing, DIY & Gardening requirements of the locality. There is scarcely a home, school, clubhouse or government build in the Navan area that Chadwicks haven’t had some involvement in the construction of. Chadwicks Navan are proud to be part of the Chadwicks Group (formerly GMROI) with its network of branches nationwide but are equally proud to be part of the Navan community, with 22 local employees who are dedicated to customer service. Chadwicks Navan are proud sponsors of many local sports organisations, music and drama societies and charities

Chadwicks Group (formerly GMROI) is Ireland’s leading building merchanting company with 49 stores and employing 1,300 in the Republic of Ireland. Offering unrivalled value, expertise and knowledge to the sector, Chadwicks Group (formerly GMROI) has contributed to the fabric of everyday life in Ireland for 200 years, supplying products and building materials for homes, hotels, buildings and roads throughout the country.