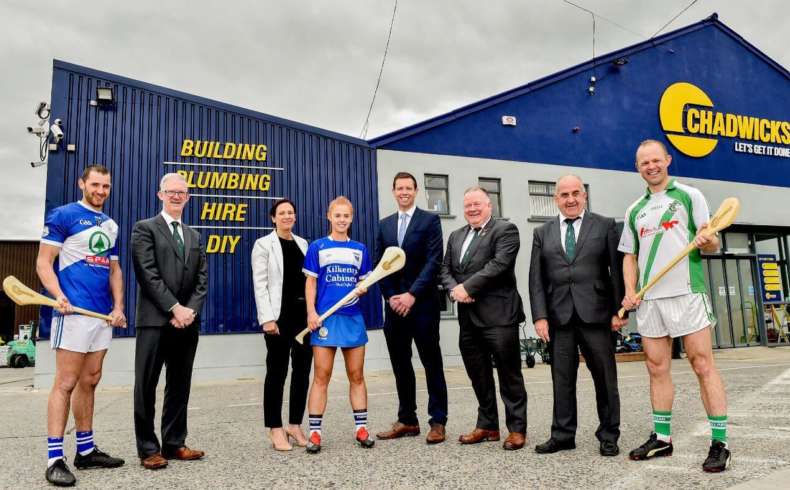 The Chadwicks Club Hurling League is a cross county competition which has seen 71 teams from right across the province compete at Junior, Intermediate and Senior level in four divisions.  This year’s Division 1 final takes this Sunday, June 9th as a curtain raiser to the Leinster Senior Championship clash of Kilkenny and Galway. It sees two Kilkenny clubs, Mullinavat and St Martins, go head to head at Nowlan Park at 11.45am.

Tullaroan’s Tommy Walsh, who has played in the competition, was on hand for today’s launch together with fellow Chadwicks Brand Ambassadors Eamonn Dillon (Dublin) and Collette Dormer (Kilkenny).  The ambassadors will promote the Chadwicks Club Hurling League and will also support a new Chadwicks competition that will be rolled out to support clubs within the province.

The Chadwicks Kit-Out competition will see clubs in Leinster win over €20,000 of Chadwicks product to improve and enhance their changing room facilities.  Winners from each county will win €1,000 worth of product before going on to compete for the overall prize of €10,000 worth of product.

Entries for the Chadwicks Kit-Out competition are now being sought.  Chadwicks are asking clubs to tell them:

2.      About how your club positively impacts the local community

3.      Why does your club needs this prize and what benefit it will bring?

Clubs can enter at www.chadwicks.ie.  Check out #ChadwicksKitOut on social media for more.

Speaking about the announcement Brian Conneely, Chadwicks Group (formerly GMROI) Finance Director said; “We’re delighted to come together with Leinster GAA to become the title sponsor of the Chadwicks Club Hurling League and wish the teams competing in the forthcoming finals the very best.  Our thanks to all the team at Leinster GAA for their help and support in bringing about today’s announcement.

“We have branches in communities all over Leinster and there is a natural fit with the community network of the GAA.  We hope this sponsorship and the Chadwicks Kit-Out competition that we have launched here today will make a positive difference within those communities.”

Speaking on behalf of Leinster GAA Chairman Jim Bolger added; “It’s a very positive step for Leinster GAA to bring a brand of the calibre of Chadwicks on board as a sponsor and is an endorsement of the good work being done at provincial level for the promotion of hurling.

“We welcome Chadwicks involvement in the Chadwicks Club Hurling League and with their support hope to grow the competition.  We also look forward to seeing the Chadwicks Kit-Out competition being rolled out and at seeing what other plans Chadwicks will bring to the table.

“Our thanks to Brian Conneely and all the team.”